A science classic that never fails to amaze! Seemingly defy the laws of physics with the Egg in a Bottle experiment. 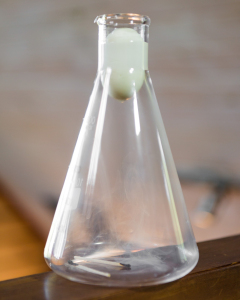 The burning piece of paper heats the molecules of air in the bottle which makes them spread out. Some of the heated molecules actually escape out past the egg that is resting on the mouth of the bottle (that’s why the egg wiggles on top of the bottle).

When the flame goes out, the molecules of air in the bottle cool down and move closer together. This is what scientists refer to as a partial vacuum. Normally the air outside the bottle would come rushing in to fill the bottle but the egg is in the way! The “push” or pressure of the air molecules outside the bottle trying to get in is so great that it literally pushes the egg into the bottle.