Ever wondered how to make elephant’s toothpaste? (Ok, it’s not scientifically what elephants use to clean their teeth but the effect looks like what might happen if elephants did use toothpaste). In fact, this experiment is a chemical reaction which causes a rapid expansion of foam – enough for an elephant! 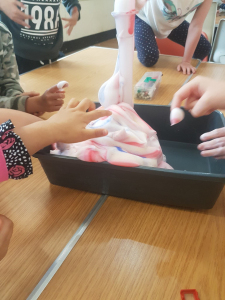 Warning! Hydrogen peroxide can be dangerous if swallowed/can irritate skin and adult supervision is required throughout the experiment. Gloves should be worn.

Have fun with this easy experiment which shows the reaction that occurs when hydrogen peroxide is  mixed with washing up liquid. A catalyst, in this case yeast, is added to make the hydrogen peroxide decompose very quickly. Hydrogen peroxide breaks down into oxygen and water. As a small amount of hydrogen peroxide generates a large volume of oxygen, the oxygen quickly pushes out of the container. The soapy water traps the oxygen, creating bubbles, and turns into foam.