“Whoops! We Blew Up the Lab!” Fun With Wacky Jacky 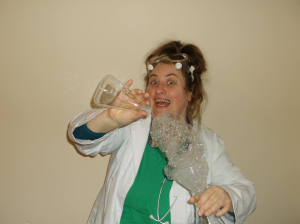 England Manchester Science Festival was successful and they have been teamed with long-standing partners Manchester Central Library to deliver their Super Science Saturday on 21st Oct.
They will be performing at least one of their full-scale theatrical science shows which combines slapstick comedy, wow-factor demonstrations, real science education and lots and lots of audience interaction and participation.
The science shows, entitled ‘Whoops! We Blew Up the Lab!’ and ‘The Amazing Air Show’ were created especially for Merlin Entertainments, a company which operates 127 attractions, (such as Alton Towers) 19 hotels and 7 holiday villages in 24 countries. They were premiered at the prestigious Blackpool Tower Circus Arena as part of British Science Week in March and were specially devised to complement the National Curriculum with topics such as Everyday Objects, Sound and Air. The shows went down a storm and Wacky Jacky, Mycro Cosmic and Professor Brox E. Gene were delighted to hear that despite stiff competition from big names such as Marty Jopson (the science presenter of The One Show),  Tower Education Manager, Jamie Truelove (who engaged Fun Science for the shows) liked the Fun Science shows the best as they succeeded most at really engaging and involving the audience.
On meeting with franchisee Jacqueline Boylan (aka Wacky Jacky) Manchester Central Library also booked the team to deliver their Family Funday provision for Manchester Day. This year’s theme – Abracadabra – will be inspired by the real magic of science, defying expectations and conjuring up a wonderful vision of the magic of Manchester, and Fun Science Bury/Rochdale will be pulling not one, not two but THREE ‘magic of science’ shows out of the hat! We will also be providing a potion lab, where youngsters can brew up their own bubbling, colour-changing concoction, alongside other ‘pop-up lab’ favourites such as the Van de Graaff machine (aka the Electrification Chamber) and slime-making.
Wacky Jacky considers herself very lucky to have secured events with such big names such as Manchester United in the past and has worked to offer flexible packages that can suit all sort of corporate and event settings, mostly based on what is already in the franchise package. 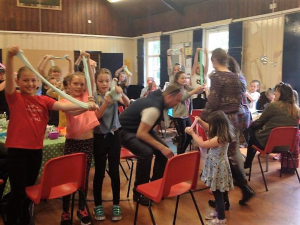 Fun Science West Lancs found itself under a mountain of slime in sleepy, seaside town, Formby recently! It was to be a one-off workshop but proved so popular, it turned into an entire weekend with almost 100 youngsters and their families making and playing with neon slime, scented slime, fluffy slime, floam and even magnetic slime! The most popular was definitely fluffy slime which could stretch for metres. Some children even stretched it both ways to create what resembled a cross between the thinnest pizza dough and biggest bubblegum ever!