Welcome to the eighth of Fun Science‘s CosWatch blog posts, which you can read through with your young scientist and learn how to see Saturn.

This beautiful footage from Voyager 2 is a timelapse showing the probe’s approach to the Saturn.

This time, we’re going to be talking about how to see Saturn, the second-largest planet in the Solar System!

Tell me about Saturn

Saturn is the sixth planet from the Sun, and takes 29 years to orbit it. This makes sense; it’s further (and therefore has a greater distance to travel) than Jupiter, which takes 12 years, and much closer than Uranus, which takes 84 years. Like those two planets, it is a gas giant, meaning it is mostly made of gas. Also like those two, it has a short day of only ten hours and forty-two minutes. 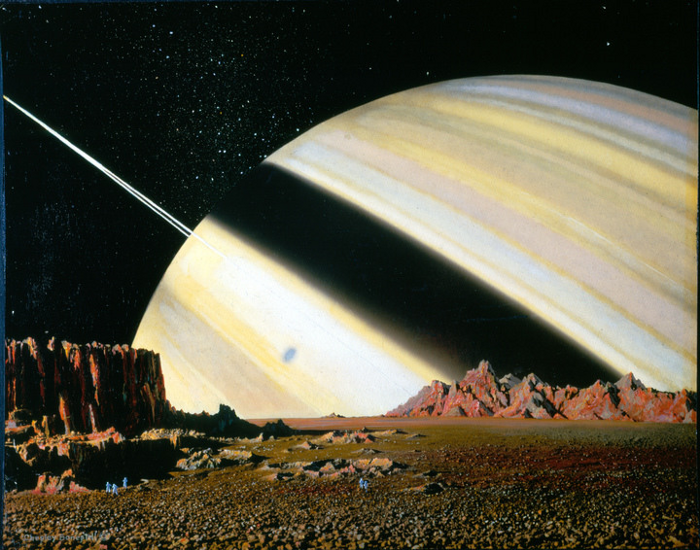 “Saturn as seen from Mimas” by Chesley Bonestell is credited by some as inspiring the post-war appetite for space that fuelled the race to get the moon.

Saturn is most famous for its colossal rings. These rings aren’t solid objects as they may appear, but a collection of lots of tiny bits of ice, and a small amount of rocky material. These ice-lumps range from the scale of microns (smaller than a human hair) to metres (bigger than a car).

This image from NASA allows us to see Saturn in transit – that is to say, passing in front of the sun. This helps illustrate the size and majesty of its rings.

The Moons of Saturn

Some kids get all of the toys. As well as the biggest rings, Saturn has 82 moons, the most of any planet in our solar system. We discover them so quickly, only around 50 of them have names!

The most famous of these moons is Titan. Titan is a very exciting moon; much larger than ours, it’s the only other place in the solar system where we’ve found still bodies of liquid, which may be necessary for life. We’ve also landed a probe on its surface; the image to the right is really from the ground of Titan itself! 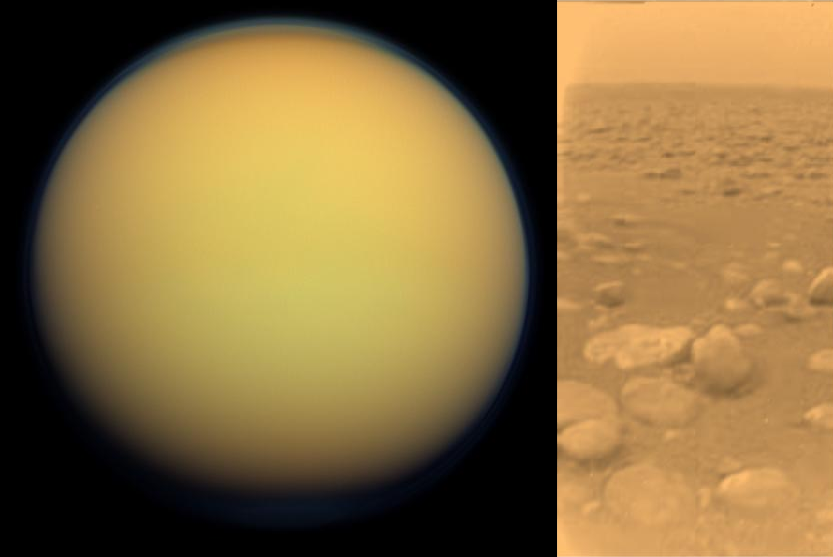 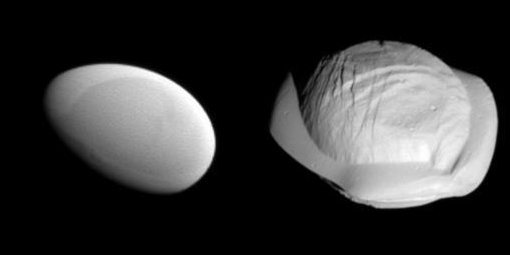 On the left, the pebble shaped Methone. On the right, the sweetie-shaped Pan. Both from NASA.

However, its rings and moons weren’t known about until much later. Galileo, who discovered four of Jupiter’s moons, observed Saturn in 1610. He thought the rings were two moons on either side of Saturn, and described them as “Saturn’s ears”; based on this sketch he drew, it’s easy to see why!

How can I see Saturn?

As said, Saturn has been observed since ancient times, which means that it can easily be seen with the naked eye. Most modern telescopes will easily highlight the rings; if you’re lucky, you’ll see some moons too. You can buy special filters to observe more detail, but these aren’t necessary.

As ever, the website timeanddate.com is very helpful for this – using their “night sky” function, you can choose your location and planet, then simply test visibility for each of the nights. Currently, Saturn is hanging around “with” Jupiter in the South – though of course they’re over a billion miles apart in real life.

Saturn has inspired art, religion and scientific discovery for thousands of years, and will pretty much always be visible. I hope you enjoy observing it!

This is the last of the CosWatch blogs for now, but who knows what’s in store for the future? I hope you’ve been able to learn some interesting facts, and perhaps see some of these beautiful objects for yourself. I’ve been Electron Edward, and it has been a pleasure to share the delights of the cosmos with you.

In this article I explain that a further a planet is from the Sun, the longer it takes, generally, to orbit it. This is briefly touching on Kepler’s laws of planetary motion; however, this is fairly complex maths, and you don’t need to focus on this until at least year 12.

Younger scientists, or older ones with good taste, may want to check out The Magic School Bus Lost in the Solar System in the (sadly late) Joanna Cole’s Magic School Bus series to help them remember and learn about the different planets – though note that this book has Pluto classified as a planet, which is of course out of date..