Welcome to the second of Fun Science‘s CosWatch blog posts, which you can read through with your young scientist and learn how to see Uranus. 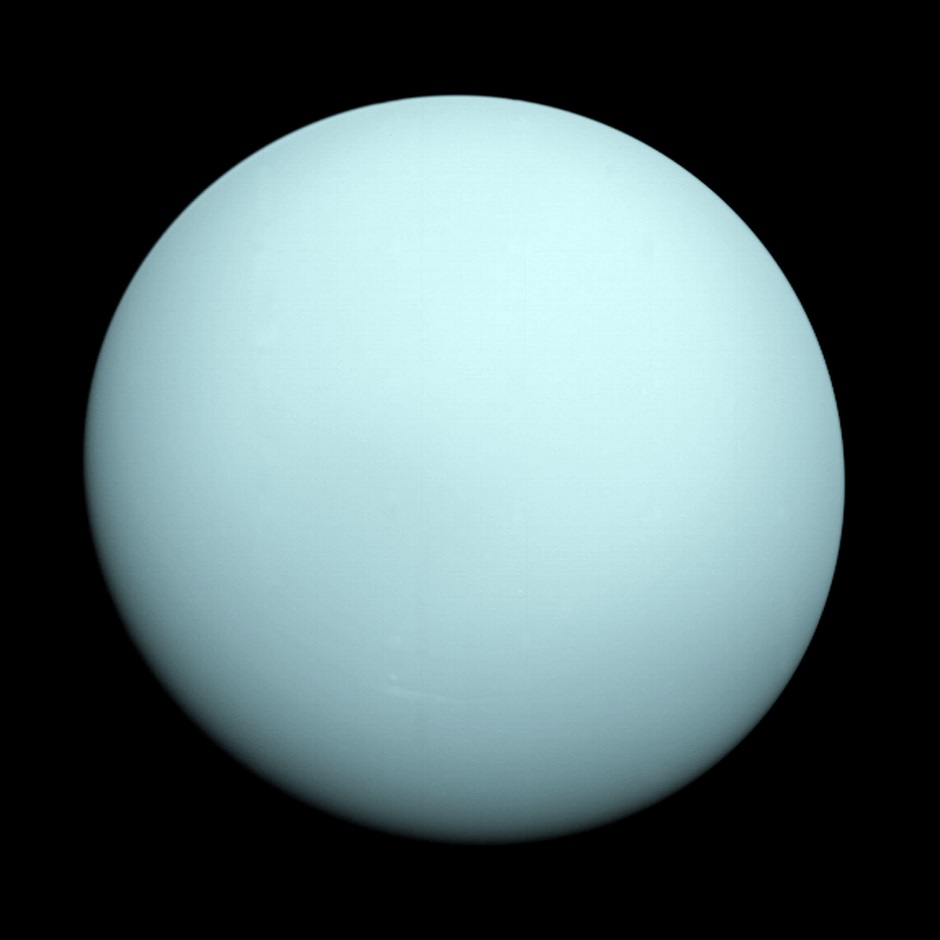 This beautiful shot from Voyager 2 captures Uranus’ colour… but that might be the least interesting thing about this mind-blowing planet.

This time, we’re going to be talking about how to see Uranus, the second-to-last planet in the solar system!

Tell me about Uranus

Uranus is the seventh planet from the Sun, and takes a staggering eighty-four years to go around it; for every “month” of Uranus’ year, seven years have passed on Earth! Like Jupiter, it is a gas giant, meaning  it is mostly made of gas. Also like Jupiter, it has a short day of only seventeen hours and fourteen minutes.

I love this art by Stefan Blaser, which shows us how an astronaut would see Uranus from the surface of its moon Umbriel.

There’s something absolutely fascinating about Uranus which makes it totally unique. If you look at art of photos which show Uranus’ rings, you’ll notice they seem to be upright, rather than sideways. There’s a delightful reason for this – the entire planet is sideways! Nobody is quite sure why Uranus is this way.  Research suggests that when the Solar System was forming, the early Uranus was hit by an object larger than Earth, which pushed it over. 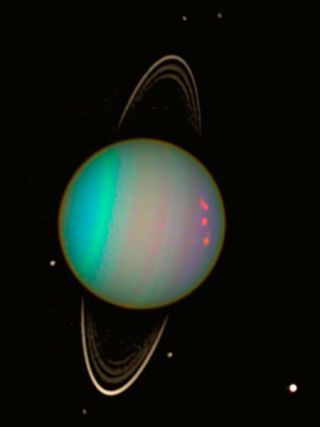 This more distant image of Uranus demonstrates its tilted axis, and some of its moons.

Uranus has at least 27 known moons, mostly named after Shakespearean characters such as Ophelia, Cressida, Margaret and Puck.

Uranus is even more distant than the first six planets. It wasn’t even identified as a planet in ancient astronomy, only as a star. That changed in 1781, when William Herschel discovered it – from the city of Bath, no less. Not only that, but its orbit helped Astronomers realise that there must be an eighth planet – Neptune was discovered sixty years later! 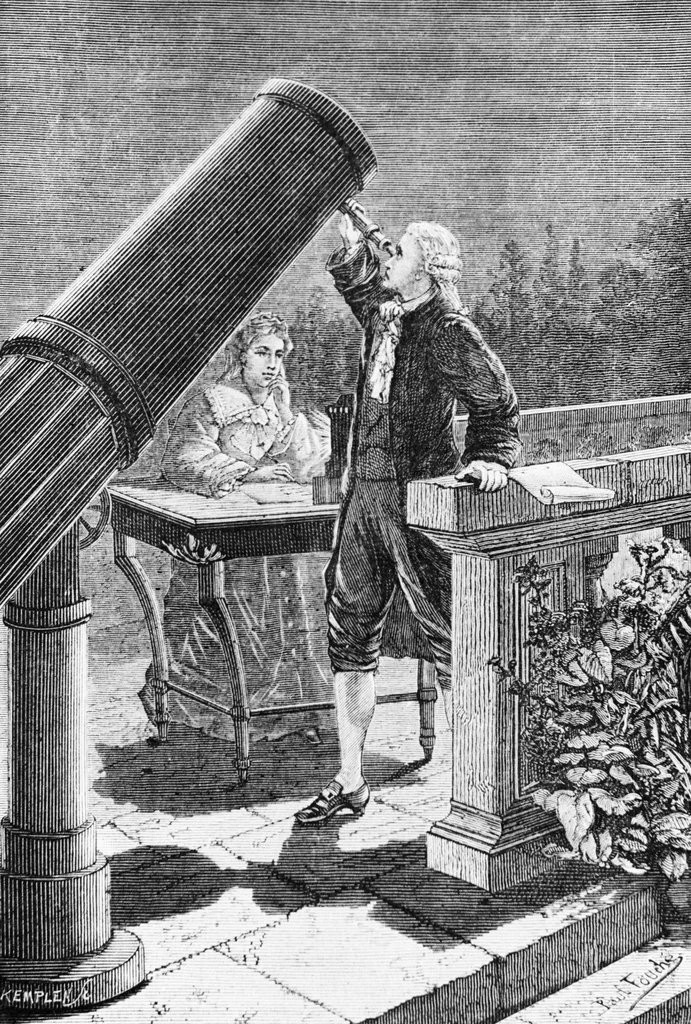 William Herschel working at his telescope, from which he’ll see Uranus. His sister Caroline would go on to make many discoveries of her own.

Astronomers didn’t agree on a name for almost seventy years. Rather than continuing the trend of naming the planets after Greek/Roman Gods, Herschel wanted to name the planet “George’s Star”, or Georgium Sidus, after his King. People from other countries didn’t want a planet named after an English King, and called it other names. One of the more popular names was Herschel, after its discoverer.

Unfortunately for Herschel (but fortunately for people who like good names for planets), Astronomers eventually settled on “Uranus”, after the Greek god Ouranos. Now, many people mock Uranus’ name because “anus” is another word for bottom, but most agree it’s a better name than George’s Star.

How can I see Uranus?

Uranus is more difficult to see than the more well-known first six planets, which is why it wasn’t recognised by astronomers for so long. It can be seen with the naked eye on a moonless night, but you’re better off setting up a telescope or binoculars. It will appear as a blue-green smudge; if you’re lucky, you’ll see some moons too. You can buy special filters to make it more visible, but these aren’t necessary.

Uranus will spend all of 2020 “in” the constellation of Aries the ram. It’s being shy at the moment, spending a lot of time hiding under the horizon where you won’t be able to spot it. I like the website timeanddate.com for this – using their “night sky” function, you can choose your location and planet, then simply test visibility for each of the nights. 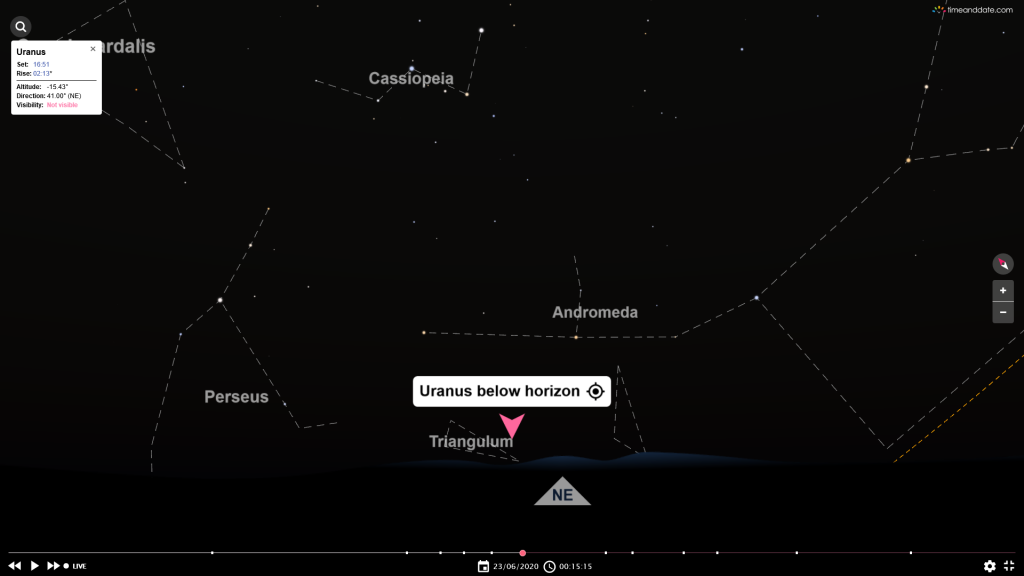 Sadly, Uranus has chosen to hide from us tonight – but will be visible soon!

Uranus is my favourite planet without life, and I can’t wait to observe it soon. Stargazing is the perfect lockdown activity. It’s relaxing, it’s best done far away from people other than your family/housemates, yet it connects you to everyone on Earth. I hope you enjoy it!

Next time, I’ll be talking about the Andromeda galaxy, the most distant and large object so far on CosWatch. See you soon!

In this article I describe Uranus as a gas giant. In fact, along with Neptune, it is a special type of gas giant called an “ice giant”. All that means is that it has lots of gasses other than Hydrogen and Helium.