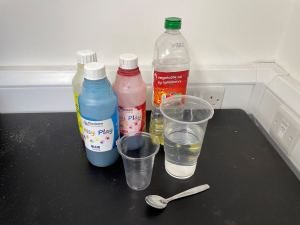 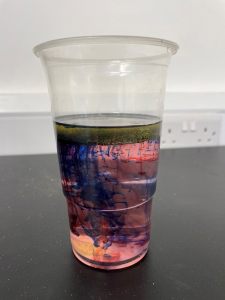 The main science behind this water fireworks experiment is all about water density.  All liquid based substances have different density levels.  The lower the density the chances are it’ll float to the top.  The higher the density the chances are it’ll sink to the bottom.  Water has a high density high.  Food colouring is basically water colourised so it too has a high density level.  However the oil a has lower density level, hence why oil will always rest onto of water for all science experiments involving the two ingredients.

For the first part of this experiment we are mixing oil and food colouring.  You may notice at the beginning of the experiment that the food colouring sinks to the bottom of the cup holding the oil.  That is the density levels of both ingredients playing into effect.  Continuing on from this you may have also noticed that once the oil mixture was poured into the glass holding the water the oil immediately began to float on the surface of the water.  But after a few moments, after the mixture has settled, the density of the food colouring become too strong that they escape from the oil and into the water.  It’ll look like a little firework explosion within the water.  Hence why we call it the water fireworks science experiment.

Best of all, depending how many food colouring drops you place into the oil, this experiment will go on for some time.  It will look amazing and would be great fun to do.

Thank you for reading Fun Scientists!  Enjoy the experiment.